Silently taxing savers: Will inflation be the solution to today’s wartime levels of debt?

To say that government debt levels are high is nothing new. Even before Covid-19 hit, despite years of austerity, debt levels were already extremely elevated. But after the fiscal damage of Covid-19, debt as a percentage of GDP has now reached extraordinary levels that, when viewed from a long-term historical perspective, are jaw-dropping. Take the US, for example. Not since the end of World War II have debt levels been as high, and on current projections they are expected to skyrocket from here. 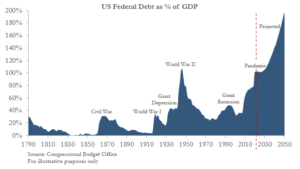 Few would argue that, in the wake of a global pandemic, extraordinary government spending was not justified. However, that does not change the fact that this debt must be repaid. The question for investors is how.

Looking at the debt situation coldly, without thinking about what is fair or morally right, there are ultimately only four ways to reduce government debt to GDP:

Clearly, default is untenable for major developed economies. We can also discount the second option, which is typically based on hope rather than realism, not least because very high levels of debt are associated with lower rates of growth. The third, higher taxes and/or spending cuts, is likely to play some part, but in the current environment, after the years of austerity which followed the GFC, there seems to be little appetite for further large cuts to public spending. Meanwhile, substantially higher taxes are always politically difficult, and even sharp hikes in headline tax rates will not raise the amounts that are necessary. For example, according to a recent op-ed in the Financial Times, raising UK corporation tax from 19% to 24% would theoretically raise the equivalent of 0.7% of GDP – a drop in the ocean.

This leaves us with the final option which, coincidentally, is the one taken the last time government debt was at levels like today’s: the period after World War II. According to a 2015 IMF Working Paper[1] by economists Carmen Reinhart and M. Belen Sbrancia, in the period between the end of WWII and the 1970s, advanced economies managed to reduce government public debt from over 90% of GDP to less than 30%, by allowing higher inflation to persist whilst exerting control over nominal interest rates – a practice referred to as ‘financial repression’. Financial repression can take different forms, but its key pillars are:

In the presence of inflation, financial repression would see nominal interest rates held artificially low so that real interest rates are negative, which over time has the effect of lowering government debt levels. Alternatively, real rates are positive but still artificially lower than the rates governments would ordinarily have borrowed at, thus imposing a financial repression ‘tax’ on debt holders.

Of course, to accomplish this, governments and central banks must first generate the inflation needed, and in recent years this has been easier said than done. Factors such as globalization and rapid technological advances have proven to be formidable headwinds, depressing the prices of goods and wages, and thwarting central banks’ efforts. Even the act of ‘printing money’ through QE after the 2008 financial crisis failed to achieve inflation, despite many warnings at the time that these unconventional measures would lead us down a path of Weimar-style hyperinflation.

However, there are some reasons to believe this time could be different.

Whether or not central banks will succeed in generating sustained inflation, after failing to do so for over a decade, is unclear. However, if they do, it seems likely that the solution to today’s wartime-like levels of debt will be very same strategy that was used in the post WWII period – a silent long-term tax on savers.